Jumping Over Giants, an Australian Alt Rock band emerges out of Queensland’s most booked live production unit, Venus Envy. Michael Geeves (Vocals and Guitar) Nathan Geeves (Bass and Vocals) Dan Crisafulli (Drums and Vocals) and George Lignos (Keys and Vocals) have played up and down the East Coast of Australia releasing two singles in 2017 from their EP Pass Go. “Brand New Day” and “Dance (Like Everybody’s Watching You)” which received national commercial and community airplay with “Brand New Day” peaking at #2 on the Australian Indie Radio Charts as well as an appearance on the Channel 9 Footy Show.

In March 2020, the entire world was hit the COVID-19 pandemic and along with the rest of the world Venus Envy had one question “Where do we go from here?” The answer was simple, “Let’s start the band we always wanted to be in!” – Jumping Over Giants was not only a statement about their determination to succeed in their new direction but a new chapter in the band’s musical evolution.

In April 2020, A month later the band was writing and demoing new songs, shaping a new sound and rediscovering their love of music. Word of the new direction and rejuvenated passion to create spread to The Manick Label and the band was instantly signed and started preparing for the release of their first single.

“Ordinary”, The first single from Jumping Over Giants will be released for Summer 2021. The song was recorded at Parafonik Studios in Brisbane Australia and was produced and mixed by George Ahas Lignos. The single is just the start with their debut album set to be released in early 2022.

“We are finally where we want to be as a band, creating music that positively impacts our listeners. We are excited for people to hear what we have been working on an continue the evolution of our band.” 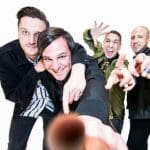 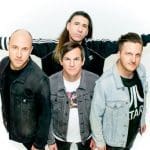